Police buildings are not usually known for their progressive design, but the new Riverstone Police Station is an exception, paving the way for a ‘new generation’ of stations across New South Wales.

The new development needed to be strong and long lasting to house the Quakers Hill Local Area Command, and equipped to serve the growing local community well into the future. As a key public administration building in the area, it also needed to be an inviting and secure facility with a high-quality and attractive finish, to meet the demands of modern policing.

Project Architect for Gardner Wetherill, Lindsay Henry has worked on a number of New South Wales police stations in his career but says the Riverstone project really breaks the mould.

“Up until recent times, all police stations – in terms of planning, furniture and colours, were very regimented, if not conservative. Lindsay noted, “that when we were engaged for the Riverstone project, the verbal briefing from police, was that they wanted to introduce a more vibrant, open-plan and user-friendly building for the Command to enjoy, whilst still undertaking their demanding daily operational roles”.

“This is the first of the ‘new generation’ stations, and will be soon followed by Tweed Heads and Southern Highlands stations. I believe New South Wales police are taking a much broader view of their new and future stations, being more colourful, pleasant and enjoyable environments to visit and work within.”

Project Manager for Brookfield Global Integrated Solutions, representing New South Wales Police Property Group, Mr Dragan Sancanin, says one of the main objectives of the build was to make Riverstone Police Station a welcoming place, for the staff and the community.

“The Police Building Guidelines had been in place now for several decades, and they were, until recently, generally focused on using a relatively neutral colour palette and finishes – keeping things muted and low-key,” Dragan explains.

“For Riverstone, we wanted to open the space up; dropping some of the enclosed offices and widening the corridors to make it a nicer facility to work in. We’ve added a few vibrant colours, new furniture and custom joinery, so the whole front of house is much more friendly. The early style used to be basic and utilitarian but now it’s more welcoming for those who enter the building.”

But the build was not without its challenges.

“We were on the edge of a 100 year floodplain and adjoining a residential area, so we needed to be considerate and sensitive with our approach to design, acoustics and materials. The project called for durable external finishes where longevity of quality materials was a key factor in our selection, to simply minimise ongoing maintenance issues,” Lindsay says.

He also stated, the design team were looking for a cladding product that was smooth and modern, that would not hold grime, and could be easily maintained.

Cemintel Surround is a highly versatile and durable cladding option that achieved the design brief.

As a pre-finished, long-life cladding, Surround gives a contemporary and professional look that reflects the authority of the police station.

“I think it’s an excellent product,” Lindsay says. “The facade panelling is quite a strong element of the overall aesthetics. We wanted a ‘slick’ material that would colour contrast, but be visually compatible with the red terracotta tiled south wall, and also appear appropriate in a commercial-type setting, hence, the Cemintel product was ideal.

Lindsay added, that Cemintel’s service, guidance and assistance during the design, development and application of the Creative Facade System on site was invaluable.

“I really enjoyed working closely with CSR, the Cemintel team was very professional in how they handled everything, from the design phase through to the delivery and installation.

“We were one of the first projects to use the Surround product and our sales rep was excellent and very accommodating. Even when there was a shortfall, he went to great efforts to make sure it was available from overseas.”

“With such a design change, it can be quite a lot for people to take in, but the feedback we’ve received is that staff at Riverstone really like the building’s ‘new generation’ appearance and appreciate the end result,” adds Lindsay.

Dragan agrees: “I’ve spoken to the Station Commander and his staff – they’re happy and it’s a much more pleasant environment to work in. The feedback has been really positive.

“The police station is a pillar of the Riverstone community and the end result of the renovation really reflects this role,” he says. 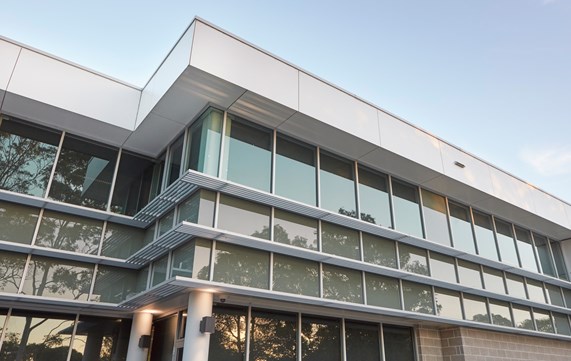