Through clever design, craftsmanship and hardy materials, a small stone cottage nestled in rainforest has been transformed into a retreat for its owners.

Built on land bordering the World Heritage Springbrook National Park in the Gold Coast Hinterland, this project had to tread lightly and work with the environment, not against it.

The owners had a dilapidated stone cottage on the site and wanted a design with a small environmental footprint that made use of the existing stonework, while at the same time creating a modern entertaining retreat for their family and guests.

Architect Dave Andren says because of its location, the build was one of the most challenging projects he’s worked on.

“The site is quite steep and it’s all unstable ground so it was very difficult to build on,” Dave explains.

“Due to the geological instability and environmental sensitivity of the site, the project needed a sizeable team of consultants that even included a fauna expert who had to relocate native animals away from the construction site.”

“It is also an extremely wet environment. The forest tries to claim anything you put in it, with moss and growth over anything that’s in contact with the ground.

The upshot, Dave says, was that only highly durable, weather-resistant materials were appropriate, and Cemintel’s BareStone cladding fit the bill.

“The owners wanted materials that required very little maintenance but it also came down to the simple but tough exterior look of bare concrete.”

Cemintel BareStone is a prefinished, lightweight cladding system that combines the look of raw cement with easy installation.

The design brief from the keen hobby wine-makers included having a cellar and a space where they could relax and enjoy the fruits of their pastime; the downstairs level became the wine tasting ‘cave’ in the existing stonework.

Dave says one of the main design ideas was to contrast downstairs with upstairs, creating two distinct environments whereby the lower level was dark and rustic, but the house above was light, airy and open to the magnificent views.

“The light colour of the BareStone strengthens the appearance of the new house floating over the top of the old one,” he says.

Mick Corcoran, Director of Benchmark Building Projects, says BareStone helped preserve and elevate the stone features of the original cottage and blend the new home beautifully into its rainforest setting.

“The raw, organic look of the BareStone allowed it to merge seamlessly with the timber and the old stone features of the original home design” he says.

“The durability of the cladding made it perfect for the dense forest environment.”

Mick says although it was the build team’s first time working with BareStone, they found it easy to work with and felt it delivered great results.

“The fact that we didn’t have to paint the cladding on the second level meant the scaffolding could be removed quickly and didn’t have to stay up and get in the way of the rest of the build process,” he says.

Although a challenging project, the result has been described as a ‘work of art’ and the house has won six Housing Industry Association awards.

“The judges commented that the home was very ‘unique’, they admired the craftsmanship and felt it was a home they don’t always see in the industry,” Mick says.

But possibly even more telling is that the owners and their friends love everything about the house.

“The owners are blown away by the finished product, they are thrilled with their house and how the space has been transformed,” says Mick.

“They’re constantly receiving great compliments from friends too about how striking it is, particularly the attention to detail,” concludes Mick. 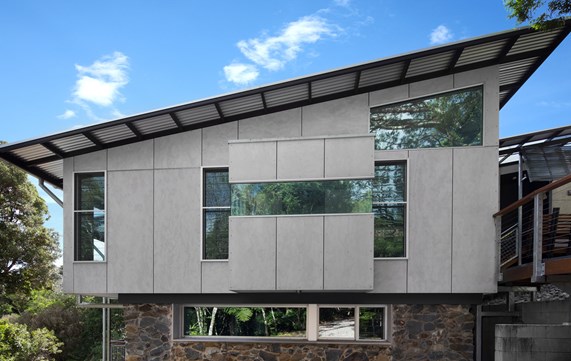