Cladding for Prime Time – Cemintel on The Block

Contestants on The Block, needed a cladding solution that was both stylish and practical, which is why they chose Cemintel.

There is a particular skill in adding character to buildings – those carefully thought-out details and exterior elements that turn a house into a home. The five houses that make up The Block in 2021 are an eclectic mix of designs located in a cul-de-sac in the Melbourne suburb of Hampton and each has its own individual style.

Three of the five houses featured in the 2021 season have chosen Cemintel cladding to complete their facades, with each achieving a clean, sophisticated look that is markedly different to the other.

Adding integrity - House Two
Reimagined, House Two has the feel of a pretty country cottage, clad in Cemintel’s Headland. The Headland product is a classic style of weatherboard cladding. Easy to install, the weatherboards are pre-primed and ready for painting, which Mitch and Mark chose to finish in a crisp mint paint.

“It is a pretty cottage now; it wasn’t before,” says The Block Architect, Julian Brenchley. “It was just a little bit of this and a little bit of that. Cemintel really does suit the heritage nature of the house with the weatherboards. It’s not just one element though. It becomes part of a composition. Using the Headland profile was a good choice, together with the roofing, the guttering, the eaves and the Dutch gables. Everything sort of hangs together as a piece.”

Mid-century marvel - House 3
Tanya and Vito’s mid-century style home was the only home on The Block that retained some of its original character, which the colourful couple were keen to preserve and capitalise on with their choice of finishes.

Their exterior features another Cemintel product, Edge Cladding. Also known as vertical join (VJ) panelling, Edge cladding delivers the look of the 1960s with a modern twist, it is fast to install and comes ready for painting.

Tanya and Vito chose a dramatically dark paint on their facade to create contrast against the huge windows and bright yellow door, relying on the vertical boards for textural interest. Added contrast was supplied by the choice of PGH Bricks’ Morada range for the front fence, which has a streamlined appearance that pays homage to the modern vibe of the home.

Brenchley says “Cemintel really is a strong product and quite well regarded. It’s a really good fit when you’re looking to include character in the way of a heritage style and the Hamptons look. It plays really well into that weatherboard look, if that’s what you’re going for. There are a lot of options in terms of board width and profiles to achieve anyone’s heart’s desire.”

“I think at the end of the day the primary driver is for me to make sure there’s a bit of value,” explains Benchley. “That’s where these CSR products are so good.” 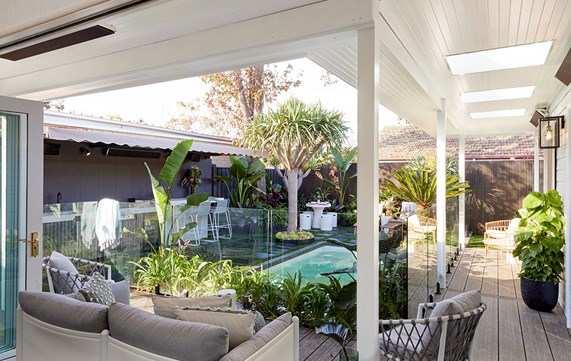