As the dust settles after the finale of The Block and the contestants count their cash, it’s worth analysing the power of a beautiful façade as a key factor in securing a good price.

>> Find your Street Style with Cemintel - as seen on The Block

While The Block might seem to be all about renovation, at its core it really comes down to real estate and property prices. The winners, after all, are not the team voted on (or out), or even the highest scorer according to the judges, it’s the team that does the best on auction day.

Now the hammer has fallen, it is interesting to see which houses sold above their ambitious reserves – and the top performers all had Cemintel or Hebel facades.

The agent’s opinion
Real estate agent Jesse Raeburn of The Agency Port Phillip, knows the Bayside area (where The Block was situated this year) and The Block very well. He’s been selling houses on The Block for four years in a row and was even a contestant in 2019. This year he was the agent responsible for selling House 3 (Tanya & Vito’s), which sold for $3.8 million, securing the couple $400,000 in profit.

“I've never won The Block,” Raeburn admits, “but I've got a pretty good track record of winning good money for my clients.”

House 3 had a memorable façade, paying homage to its original mid-century design, which featured a wall of windows complemented by Cemintel’s Edge Cladding, a style of vertical join (VJ) panelling that suited its modernist aesthetic.

Raeburn says that the front of any house is critical when trying to secure top dollars in the real estate market, which is why he is a big fan of Cemintel.

“I think whenever you are building a new home or designing a new home, street appeal is one of the most important factors to ultimately getting a good sale,” he says. “You get one chance to make a first impression. What's also good about that Cemintel product on Tanya and Vito’s house is that with the vertical lines, it does look like the original timber façade. It is also a fully weatherproof product and won’t deteriorate in the harsh climate, which is a great benefit to anyone looking at buying.”

Mixing up the looks
The houses that make up The Block in 2021 are an eclectic mix, so each chose a different Cemintel product to suit the individual style of the houses. Three of the houses on The Block were clad in Cemintel – Houses 2 (Mitch & Mark); 3 (Tanya & Vito) and 5 (Kirsty & Jesse). House 4 (Josh & Luke) featured rendered Hebel on their façade. The winning house, House 2, used Cemintel’s Headland, which is a classic style of weatherboard cladding. It sold for $4,044 million, handing Mitch and Mark a profit of $644,000, plus the $100,000 winner’s prize, for a grand total of $744,000.

House 5 was clad in the Balmoral weatherboards, echoing the very popular Hamptons look chosen by Kirsty and Jesse. It sold for $4.4 million, securing the couple a profit of $300,000.

>> Find your Street Style with Cemintel - as seen on The Block

Hebel for a touch of luxury
House 4 was clad in Hebel then rendered in a dark shade, creating a streamlined contemporary look, just the aesthetic planned by twins Josh and Luke, who ended up with a huge profit – $530,000 – with their sale. Agent for the boys, Kevin Chokshi of Ray White Cheltenham, says the modern appearance of Josh and Luke’s house and the use of Hebel was partly responsible for the high sale price because it was quite different to many of the homes in that area.

“There’s not many people who are seeing that sort of look,” he says, “A lot of the homes in Hampton are older. Those who did see it were impressed by the fact that it looks just so different to the average home that they see.”

As for the dark palette that Josh and Luke chose, Chokshi says it helped to position the home at the luxury end of the market, which again, is reflected in the final price.

“The dark colour was an interesting choice and for most people, it worked well,” he says. “Some people thought it was a bit too dark. However, the majority thought that it made the house look more elegant because darker colours generally are associated with luxury.”

He agrees that the front façade is the most important element of a home when it comes to sale price. “Especially with a luxury property I think the facade plays a pretty big role,” he adds, “because it’s the first thing you see. If they like the photo, they'll go on a date.” 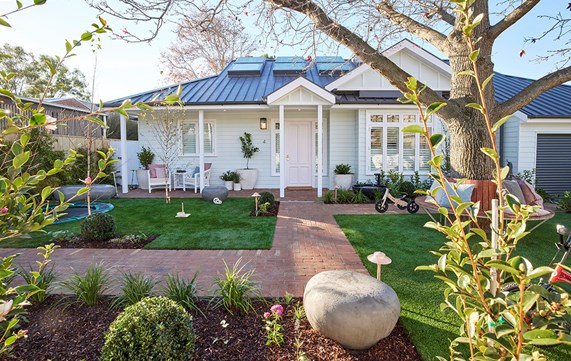