When the team at Crawford Architects was asked to refurbish the office of the Independent Education Union in Parramatta, they knew using raw materials was key to bringing character to the space.

“The client design brief was quite interesting,” says architect Paul Godsell. “We previously worked with them on the interior of their head office, which is in a 110 year old building and had been sitting unused for a long time. Obviously that space had a lot of character, with exposed timber, brick, and timber columns, however this second office was in the middle of a commercial building without any character at all.”

“Essentially, we were trying to tie some of the architectural language from their headquarters into the second office.”

Godsell says the client was also looking for a product that reflected the robustness and longevity that people expect from a union, “an organisation that’s always there when you need it”.

Crawford Architects opted to use Cemintel Barestone cement panel cladding, which is usually an outdoor facade, to create a unique look for the IEU.

“It’s got a solid feel, it’s not flimsy,” Godsell adds. “We were also looking for that concrete finish because you can put anything against it and it looks great – which is perfect for interiors. Because of its neutral colour, the product suited the overall interior effortlessly.”

He says the client loves that the cement panelling gives the office a point of difference and, “makes people stop and look”.

While the product has been used in several spaces across the IEU office, Crawford Architects took the design one step further in the boardroom by raising the ceiling height.

“Because the client is on the top floor of the building, we were able to rip out the existing grid ceiling and give them a lot of extra space. The boardroom ceiling is now four metres high, which really adds to the look we achieved with the concrete panels,” says Godsell.

He says working with an outdoor product for an indoor use can be slightly more complex, but the result makes it all worthwhile.

“You’re usually installing it in big sheets, but in this case we needed to cut it down for joinery, so we had to shake it up a bit and there was some cutting on site. In the end though, it gave the look of concrete without having to do all the work with cement, and the quality of finish is excellent.”

While Godsell hasn’t used Barestone on previous projects, he is keen to use it in the future.

“I really like the look of it. It’s a solid product that comes in big pieces, its waterproof, doesn’t need any finishing and it looks like it’ll be there for 100 years,” he says.

He was also impressed with the product’s simple components and construction techniques that ensure fast and easy assembly.

“You don’t have to worry about much, you just need two people and a screwdriver. The fact that it’s so easy to install cuts down on labour processes significantly.” 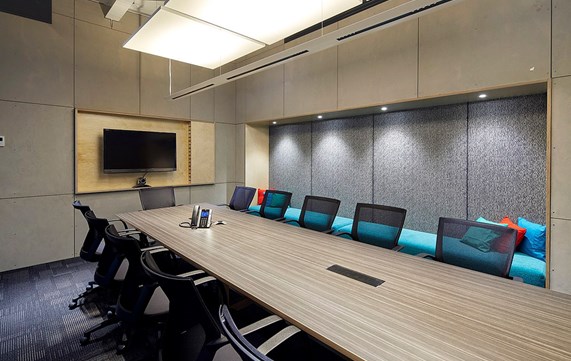 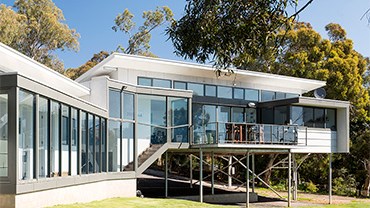