One of the biggest events in Australia in the next 12 months is the hosting of Commonwealth Games on the famous Gold Coast.

Private developer, Grocon, were selected as the developers of the project in 2013. They were tasked the project to redevelop seven hectares of the Parklands site. The redevelopment comprises of over 1,200 permanent dwellings that will provide accommodation and services for up to 7,000 athletes and officials during the Games. There is also over 7 hectares of green and open space incorporated into the development plan, including community areas and landscaped spaces.

Because of the existing strong relationship the Cemintel team had with the developer, Grocon, they were given the challenge to come up with a façade product that would suit the non-standard window profiles.

In a truly collaborative effort between the Queensland team, Grocon, the DesignLink and Cemintel Operations team, the solution was a specially designed, Australian manufactured lightweight sheet and cleat to fit the window profile. The sheet meets wind loading and other performance requirements required for the 60,000 square metres of facades across the 18 buildings.

The $550m project cost for the construction of the village has created over 1,500 jobs throughout design and construction phases. Grocon commenced works on site in August 2015 and the site will be handed over in October 2017 to the Gold Coast Commonwealth Games authority (State Development Queensland Government).

After the Games, Grocon will prepare the development for a mixed use residential community with apartments and townhouses becoming available for rent from early 2019. 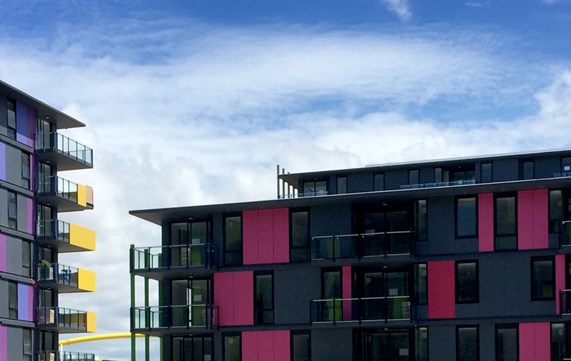