When country couple Kirsty and Jesse won kitchen week on The Block, all eyes were on their navy cabinetry – and the feature wall of Cemintel that provided the necessary textural contrast.

It’s a full-on workload, combined with the pressure of producing a high-quality, much-photographed end result. Welcome to The Block, where every last detail can result in a big win (and a lot of cash) for two lucky contestants, or humiliation on national television for the losers.

Builder Ben Ladner of Albourne Construction worked as a carpenter on The Block in 2021 and was part of the building team of House 5 (Kirsty and Jesse’s house), supporting Toak Projects. It was a great experience he says, although he’s not in a hurry to repeat it.

“Being on The Block is extreme,” he says. “I assumed a lot of it was put on for the cameras but it’s not at all. That’s what it’s like.”

Ladner is a big fan of CSR's Cemintel, using it for many of his regular projects, and was instrumental in choosing Edge Cladding for Kirsty and Jesse’s winning kitchen as a feature wall.

He says that Cemintel was ideal for House 5 because of its durability, as well as the character that the tongue and groove profile added to the house, which has a Hamptons-style aesthetic.

“It’s a lot more hard-wearing than a timber or plaster product, especially in the kitchen,” he says. “I know it doesn’t need to be waterproofed in the kitchen, but it’s part of the home where there’s a lot of traffic.”

“This will be a family home where kids drop their schoolbags against the wall and I know it’s not going to dig or scratch the surface.”

The kitchen area of House 5 included a variety of materials to create interest in what was a huge open space, and Ladner says that Cemintel works well with other materials, especially Gyprock plaster, because of its slim profile.

This becomes even more important as the open-plan living area is added in later episodes.

“Kirsty and Jesse have archways throughout the whole house,” he explains. “We did an archway from the kitchen, where the kitchen and living room meet the hallway. Because Cemintel has a thin profile, it was easy to work with so we could cut an arch out of the Gyprock product as well and it all fitted well together.

“The fact that it matches the general plaster thickness means you can stop and start with plaster fairly easily and create a smooth profile.”

Ladner mostly works in Melbourne’s northern suburbs, often with older homes, so says he finds Cemintel a great product for renovation projects because it has so much character.

“We use a lot of the V-joint panelling in California bungalows,” he says, “because it fits in with the style.”

“If it's my choice, I always go with Cemintel. I've got a good relationship with Bell Plaster [suppliers to The Block], and they stock Cemintel and I do use it a fair bit.” 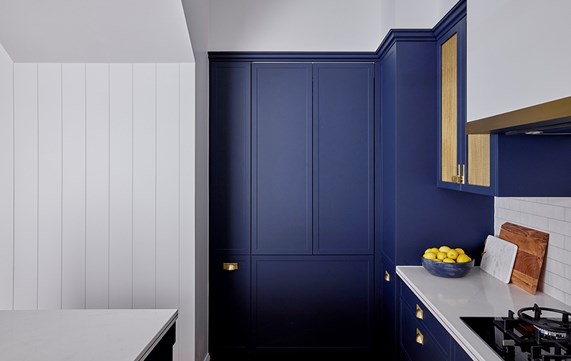